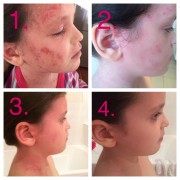 My daughter (9 yrs old) has had eczema since she was a few weeks old. We initially held it at bay with diet/breastfeeding and moisturising daily. She had a major flare following contact with raw egg and she was subsequently diagnosed with egg, milk, and dust mite allergy. She has always tested negative for coeliac disease and tolerates gluten well. We reduced/avoided all triggers and her eczema was managed well except for a few flare ups that were easily managed by short term low potency steroid until she was about 5.

Within a week of starting school Phoebe was covered with inflamed infected eczema. We diligently followed all the medical advice and finally reached a point where we could manage but not control her eczema with daily bleach baths, wet wrapping, steroids and topical antibiotic when needed. In 2014, Phoebe’s condition deteriorated again and so we saved and saved and sent her to the Avene Clinic for treatment. That treatment was amazing and it was the first relief she had experienced for years. When we returned home to Australia her skin almost immediately flared again. She had picked up another infection during our travels. We managed to get her skin back under control but it slowly deteriorated until we decided to return to Avene in September 2015.

We were extremely hopeful that with the second trip to Avene her skin would strengthen and this time she would be able to keep it clear and smooth. This time around even Avene didn’t work. Phoebe seemed to be allergic to Staph bacteria and nothing seemed to be able to control it.

Out of desperation I had posted a Facebook photo of Phoebe and a friend of a friend pointed me to Dr Aron. I was hugely sceptical. I did the research and the theory of the Aron Regime stood up, so I signed up. I am one week into treatment and its the first time Phoebe’s eczema has been under control for years.

SO, if you are doing everything; topical steroids, topical antibiotic, antihistamine, bleach baths, wet wrapping, oral antibiotics, probiotics, moisturising several times a day, and are still struggling with controlling your child’s eczema then you are where I was on 7th September this year.

Picture #1 is of Phoebe with an overwhelming staph infection. We were doing steroid, topical antibiotic, compresses/wet wraps, antihistamine, bleach baths and moisturising several times a day.

Picture #2 is of Phoebe on 23rd September after weeks of two different oral antibiotics in addition to all the treatment listed above.

Picture #3 is of Phoebe the night she return after 3 weeks of intensive hydrotherapy at Avene, France. There they had to continue oral antibiotic after she flared again in week 1 of treatment.

Picture#4 is of Phoebe after 1 week of the Dr. Aron creme. We are now doing 5 apps of the creme on her body and 3 apps on her face. No wet wraps, no oral antibiotic, no bleach baths, no additional moisturiser.

The most amazing thing is that Phoebe is no longer itchy.

You can find out more about Dr. Aron’s eczema treatment by visiting his Dr. Aron website or the Dr. Aron Eczema Treatment Discussion page.