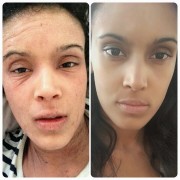 I’ve had eczema since around the age of 7. In the past few months, I can only understand that it was an emotional trauma that set it off. With help from my therapist (yes I got so ill I had to see a therapist) we went back through the years and found that to be the only likely trigger. So… between the age of 7 to around 9 months ago I’ve had a long eczema journey. I don’t remember it that much as a child, just a lot of doctors visits and sleeping in gloves and waking up in a bed of my own blood. For my mum I think it was pretty tough on her. Doctors wouldn’t send me to a dermatologist (got to love the NHS) and so each time we would be sent home with a new cream and it was always the same process; tears, pain, progress and then eczema again. Nothing ever really worked. Finally at 13 I was sent to a dermatologist. The awkward self conscious teen seemed to win them over. I was prescribed Eumovate, Elecon and Doublebase. It worked so much better than anything else I’d had and the end seemed to be in sight. It then became very sporadic. Months of just double base apps several times a day, always a mild itch and a flare every few months. I do always remember that this got worse at university. I have recently discovered my skins intolerance to alcohol so anybody who went to university can clearly understand why the flare ups got so bad and came much more often than usual.

At times it would get me down but I always considered myself to have mild eczema. I still complained a lot but I distinctly remember seeing a boy of about 7 in the dermatologists waiting room, red raw and seeping and couldn’t believe how bad some children had it.

Around November/December last year I had my drink spiked, badly, and I was ill for around 3 or 4 days. My skin reacted very, very badly. Knowing that after a lot of alcohol my flares were bad I put it down to that. I plopped on some steroids but it didn’t seem to go away as fast as it usually. This is where it all began.

I was advised by a work colleague to go about it the natural way and to “clear” the eczema from my body. At this time I had no idea that TSW (topical steroid withdrawal) was actually a ‘thing’. I just thought of it as a body cleanse. So I stopped all creams and started using organic oils and started drinking green clay. By the first week of January it had begun. I came out of the shower one morning and my face was burning hot and bright red. I thought I’d just had the shower on too hot. (Anyone with eczema knows the relief of hot water on itchy skin). This continued through the day and the next and the next…

3 weeks in and it was worse, much worse. I had at this point stopped all meat and alcohol and am relying on oils and green clay water mix for relief. The dryness began and the redness developed into a constant, deep intense pain. My skin got tight, it ripped, it seeped, and clothes and human contact felt like burns to the touch. I had never experienced anything like this before. Later my eyes swelled everyday and I’d wake up in the morning and they’d be glued shut. At night time itching was the worst and I’d become accustomed to 3 hours sleep a night. I was in hell.

I went through almost 8 months of TSW and they were without a doubt, the worst 8 months of my entire life. Quite frankly I didn’t have a life. I stopped speaking to all my friends and family, my relationship with my boyfriend was getting worse day by day. Imagine someone you love touching you and it feels like they’re burning you. Every sexual desire no longer existed. I was so repulsed by myself I couldn’t understand why he would still want to be intimate with me. The only time we spent close to one another was when he was applying oil to my elephant like dry skin or when he’d have to hold me so tight to bring me down from one of my panic attacks. For him too, it was hell and it tore us apart.

I cried every single day and would have to rock myself to sleep wrapped in bandages and layers because my own skin was nauseating to the touch. I’ve had poison leak out of my face, every day (at least 3 times) I’d have to sweep up piles of my own dead skin, I’ve vomited from the pain and passed out from the pain. I developed anxiety and panic attacks. I became so terrified to shower. I’ve torn my own skin open from scratching because it became so thin and weak and lost I lost about 2 and a half stone (in 2 months or maybe even less) at sheer repulsion of myself that it destroyed my appetite – not to mention I didn’t sleep through the night. Ever.

Then the paranoia set in. I became obsessed. I lived on rice and veg as I was too scared to put anything else in my body in case it would affect my skin more. I became terrified of steroids, and almost anything pharmaceutical. I even refused to take paracetamol at one stage as I was convinced all medicine was made to give me and other people cancer. My body and now my brain became my a prison. I was in a dark, bad place. My GP wanted to put me on anti depressants, and I’m not sure if I would have ever done anything but I thought numerous times about suicide. I just wanted it to all go away. I wanted to live in the dark and never see or speak to anyone ever again.

In May 2015 a man approached me in the park on day while I was working. He clearly saw me scratching and I was so annoyed that he asked as it made me so self conscious. He told me about a man named Dr Aron who had saved his leg from a spider bite infection and had treated his wife for eczema. I thought this man was crazy. He gave me Dr Arons number and told me to call him that day and said that once I had the cream, within a week I’d have my life back. What?! how could I believe that? All this time and someone could make me normal in a week… I didn’t believe it.

I joined the Dr. Aron page on Facebook, looked at Dr. Aron’s website and was still in disbelief. The state I was in I don’t think I wanted to believe it. I had gone through the worst period of my life and I felt like it had counted for nothing.

The second night of cream I slept through the entire night – the first time in 8 months. I don’t think I can describe that feeling. The words don’t exist. I went back home to start the first week of treatment and rest so my mum could help and I called her in and sat and cried in her arms at the prospect that this all might be over.

I’m now 6 weeks in and I have my life back! I’m happy, positive, and so excited to get up in the morning. My world has changed. I had really forgotten what happiness was. Parts of my skin are perfect but my arms calves and feet are proving to be a bit stubborn, but this isn’t even 1% of what I went through before. The tough parts still itch and aren’t very attractive but I know I’ve suffered for a while and the healing will take time. Dr Aron has saved my life!

If you told me taking this cream would work but would knock 20 years off my life I’d still take! I never want to go through what I have this past year.

My skin is healing so fast but the psychological scars are still there. I think they are the ones that take the longest to heal.